Trees after a Fire? 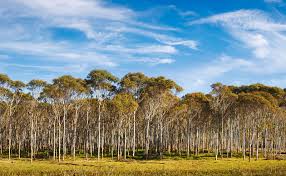 Australia is an arid continent that has unique ecosystems and organisms. These unique ecosystems are continually being exposed to natural and human-made events. Bush fire, drought and flood are the three main events that affect Australia’s ecosystems. These events can devastate various ecosystems but there can also be some positive outcomes.

Please note this article does not in any way dismiss the heartache and devastation suffered by many across Australia, my Grand daughter asked me if the trees would ever grow back so I thought I would research what happens to trees after a fire.

Effects of fire on the ecosystem

A bush fire in Australia has both negative and positive effects on the ecosystem. The fire destroys some adult trees and burns the branches, trunks and leaves of others. It also burns the undergrowth. The positive effects of this means that more sunlight can then reach the soil and seeds that were waiting for a fire release them can germinate. Young plants can thrive due to an increase in light.

A fire can change the structure of the soil by making it finer but it also releases stored nutrients in the soil that act as a fertiliser. This provides suitable conditions for seeds to germinate, but also makes it easier for the soil to be washed or blown away.

A bush fire reduces the number of animals in a region. Animals are either killed or escape to a safer area. They are unable to return until food becomes available again. The food web is significantly damaged and may take years to recover.

Obviously plants can’t move away when a fire comes through an area, so how are they able to survive and persist?

Most vegetative survival involves the protection of tissue from heat which would otherwise destroy it. Fire resistance and tolerance is exhibited through: bark thickness, other vegetative insulation, above-ground re sprouting, underground roots and stems.

Bark thickness: Thick bark insulates and protects the cambium from heat and damage. 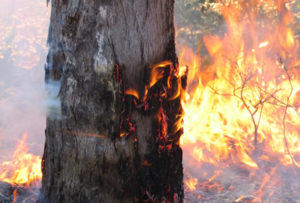 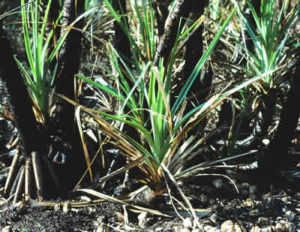 The apical meristem, also known as the “growing tip,” is an undifferentiated meristematic tissue found in the buds and growing tips of roots in plants. Its main function is to trigger the growth of new cells in young seedlings at the tips of roots and shoots and forming buds.

Above ground re-sprouting: While many trees are killed by total defoliation following a fire, some can re-sprout from epicormic buds, which are buds positioned beneath the bark. Eucalyptus trees are known for their ability to vegetatively regenerate branches along their trunks from buds. This is because epicormic buds of Eucalyptus trees are more protected than on other tree species because they are set much deeper at maximum bark thickness (Burrows 2002). The ability to survive and re-sprout depends on tree height, scorch and char heights, but also tree species, age, size (height) and the severity of the fire.

Ladder fires running up the trunks of these Melaleuca trees might look impressive but they can stimulate regrowth from epicormic buds and do not pose a threat to the trees. 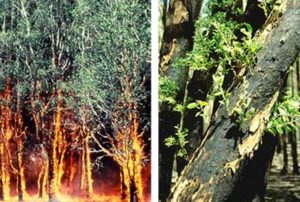 A fuel ladder or ladder fuel is a firefighting term for live or dead vegetation that allows a fire to climb up from the landscape or forest floor into the tree canopy. Common ladder fuels include tall grasses, shrubs, and tree branches, both living and dead.

Below-ground roots and underground stems: Because soil is a good insulator, buds underground are well protected. Plants can survive fires by re-sprouting from basal stems, and also from roots and horizontal rhizomes. 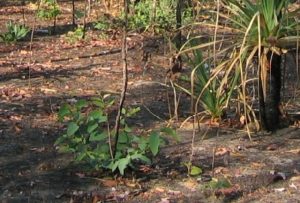 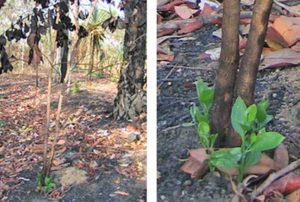 Root suckering can result in large clonal populations post-fire. Other plants have woody swellings at the base of their stems called lignotubers. They contain latent buds which are released from dormancy post-fire. Most Eucalyptus species have lignotubers. Geophytes survive burning because the storage organs are below ground protected from burning. They persist vegetatively between fires, and are stimulated to flower following a fire.

Conditions post-fire can be very different to those pre-fire, but contrary to the way things look, it’s not all doom and gloom for plants. Many are stimulated to reproduce following a fire. A non-sprouting species with thin, flammable bark would not be expected to survive fires, but it can dominate flammable environments because it regenerates only after fire: its seed germination is cued to post-fire conditions.

There is lots of cleaning up to do after a bush fires, many Hosts need assistance with replanting, rebuilding, fencing, just about anything at the moment so if you would like to Volunteer and help our farmers but you’re not a member, then don’t miss out! Join Today https://wwoof.com.au/join-wwoof/  Use the code REVIVE and we will automatically add 3 months to your membership for free!